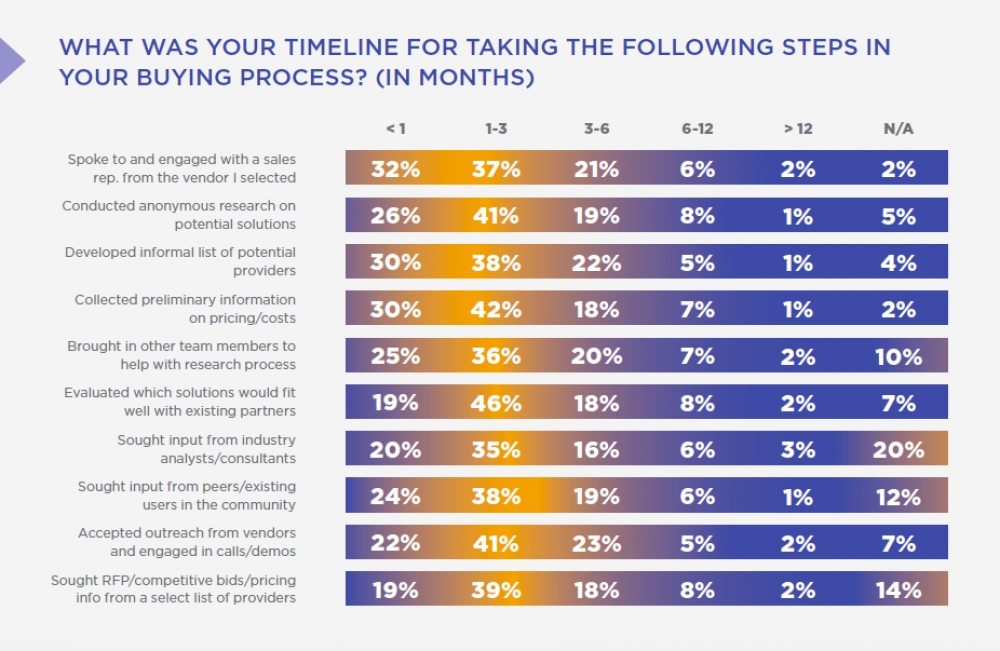 We recently wrapped up our seventh annual B2B Buyers Survey, and, as always, were intrigued to hear straight from more than 200 executives who had been directly involved in a B2B purchase decision (with 72% being the primary decision maker) in the past 12 months.

Some of this year’s findings further validated trends we’ve seen over the past few years, such as:

ADVERTISEMENT
While these results underlined the buying patterns we have seen with digital experiences influencing more of the early stage of engagement, they also revealed some new trends both sales and marketing teams will need to address.

Probably the most interesting point I took away from this year’s responses were when we asked about specific actions buyers took at different points in the journey. In the past, this question had validated that top-of-funnel behaviors were mostly digital and anonymous, while middle- and late-stage behaviors included more direct conversations involving sales.

This reveals that while it is ultimately taking longer for deals to close and the process is becoming more complex as buying teams expand, most of the key steps for selecting a solution provider occur within the first 90 days.

The reality is that legal reviews, pricing negotiations and budget issues often account for the biggest time drains on getting contracts signed, but that doesn’t mean B2B buyers move slowly. In fact, companies that are still approaching prospects with drip marketing campaigns that take months to culminate are likely losing out in the key early stages of engagement.

Our research shows B2B buyers move at the speed of their business, which means there is often an urgency to support short-term needs. This was further evidenced by the finding that 41% of buyers say purchase decisions are often accelerated or put on hold based on changing business needs.