Like everything else digital, email marketing is changing. As the lead generation strategy of choice for many years, it is now being reformed by the dramatic shift to social media as a real-time communication platform. For BtoB companies, the email/social synergy can be a profitable one.

New thinking and new solutions have recently sprouted around the intersection of social networking and email, most notably in a new report from email services provider ExactTarget. Although the company could be hammered by social networks and their ability for its users to bypass email, the company’s research shows the opposite effect.

“What we have found is that social networking and email can have a synergistic relationship,” says Morgan Stewart, director of research and strategy at ExactTarget. “Email can promote social network use and social networks can promote email subscriptions. The synergy can grow a company’s total audience. This development is very relevant for BtoB marketers.” 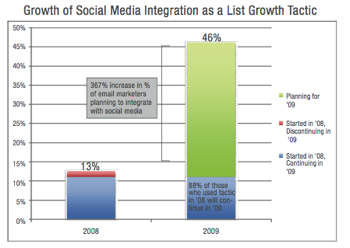 Stewart believes the viral relationship between email and social networks depends on finding the prospects and current customers that are most willing to share information. ExactTarget’s report “Expanding the Reach of Email Through Social Networks” shows a 367% increase in the number of companies that plan to integrate email and social networks in 2009. Its research is currently light on BtoB applications. However, many other ExactTarget customers have successfully integrated email and social media. Powell’s Books, the Portland, OR-based cross-channel retailer, created a Facebook community last year by driving email customers to it. Then for Valentine’s Day 2009, it offered a $5 discount via Facebook that had to be redeemed via email, which drove the Facebook customers back to email.  Specific results are not available but Exact Target customer Carma Labs (makers of Carmex lip balm) used a similar strategy to take its email subscriber list from 3,000 to 30,000.

As Stewart points out, BtoB is ripe for the social/email integration. Marketbright co-founder Erik Bower says social media does not provide the kind of authentic BtoB customer voice that email does, but it does aggregate the kind of engaged prospects that tech companies have been able to assemble through user and developer communities. Integration, he says, will require advances in automation.

“We’re working on some mechanisms to measure social media and build it into lead scoring,” he says. “It’s interesting to see the holistic view of the customer you can get by integrating social contacts and email. I think we need to get to a point where social contacts triggers email contacts.”

Bower hits on a critical point. With all the action around integrating the two platforms, there are still several critical scenarios that have not been addressed. The most critical is lead scoring. Suppose a prospect that has been communicating largely through email has been tabbed as a grade B prospect by a company’s demand generation team. That grade is based on a threshold of email opens, responses, and information requests. Now let’s say that prospect has dropped to a C or D grade based on a lower level of measured interaction. However, the prospect has been a regular visitor to that company’s Facebook page and follows the company’s CEO on Twitter. It is also a member of several executive networks on LinkedIn. Current lead scoring methods don’t give credit to the social network activity.

Should they? Does a prospect engaged via social networks carry the same value as an engaged email prospect? The jury is out on the answer, but lead management  vendors will most likely address that issue through new automated applications soon.

“It’s a very good question and a big question,” says Loren McDonald, VP of Industry Relations at Silverpop. “We have the ability to track where a web site visitor came from but right now we don’t know how to score that interest and more importantly we don’t know how that traffic impacts current lead scores.”

Although social networks have spiked in terms of usage, most lead management companies have not  seen a correlating drop in email. “We’re actually seeing a renewed interest in email ,” says McDonald.