Marketing has historically been handed the keys for lead generation, but a new survey from The Bridge Group shows inside sales is increasingly taking ownership of the lead generation process, bringing more emphasis to the opportunity creation phases of the sales and marketing funnel.

According to the sales strategy consulting company’s latest survey of 125 North American technology companies, more than 74% of all companies are assigning lead generation responsibility to sales. More importantly, inside sales teams are driving this transition.

Under inside sales management, lead generation representatives are evolving from not only generating potential customers but also taking more ownership of the front end of the sales process by qualifying inbound leads and setting meetings. According to “The 2009 Inside Sales Lead Generation Metrics & Compensation Report,” sales driven lead gen responsibilities are expanding to include account research, account mapping, preliminary needs analysis, and preliminary interest development. 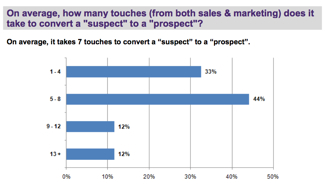 Whether the lead generation efforts are being driven by inside sales or marketing, the Bridge Group showed that lead nurturing is still a competitive necessity. On average, the report found 17% of leads convert to qualified opportunities, and it takes seven touches to convert a “suspect” to a “prospect.” The inside sales teams also still realize the contribution marketing teams play in feeding leads into the front end of the process. Based on the survey, on average, 45% of calls are placed in response to marketing sourced leads.

INSIDE PROSPECTING
While the role of inside sales teams has expanded, their primary job functions and compensation are still centered on prospect outreach. The report found the primary functions of the inside sales group were: outbound calling (82%); inbound lead follow up (82%); appointment setting (78%); lead nurturing (78%), and event registration (42%). The average monthly quota for appointments set / leads passed is 16.

The performance metrics for incentive compensation were based on similar priorities, with revenue a the top of the list (79%), followed by appointments (51%), pipeline contribution (45%), quality of leads (26%), and number of leads (21%).

The average contribution of inside sales lead gen reps to the pipeline has grown 2% over the last 2 years, now reaching 48%. That increase has come from a mix of phone and web-based activities. The number of calls per day from the average rep has actually dropped to 46 from 52.  Reps on the average spend four hours a day on the phone with 45% of calls placed in response to marketing sourced leads.

The inside sales transition has affected headcount. The average lead generation group size is six reps, according to the survey, up from four two years ago. This is attributed to the increased cost of “feet on the street” sales reps but it is also an indication that phone and web based selling will continue to play an ever larger role in both pipeline development and revenue generation.

However, the report warns against overemphasizing email. “Inside Sales Reps are becoming incredibly email focused,” it states. “They think they are getting a better response from your prospect base by using email and they probably are.  But are email responses moving the sales process forward or truly qualifying the prospect?”

The report also makes several recommendations on team management and compensation. Among them: