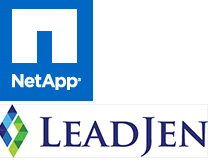 NetApp, a data storage solution company, developed a new product for electronic health records in response to growing demand from the healthcare industry. But the company was having difficulty connecting with the right customer, despite spending more than $100,000 on targeted trade shows, in addition to data lists.

“We got the sense that it might not be the product or the marketing campaign holding things back, but the lack of actionable data,” said Jessica Jorgensen, NetApp’s Senior Marketing Manager for Healthcare, in an interview with Demand Gen Report. “We were market-ready and then realized that our lists were not.”

NetApp addressed the challenge by partnering with LeadJen, a B2B lead generation company, to cull through 7,000 contacts. In a matter of months, LeadJen found 15% to 18% of the list was inactionable and 50% to 60% of the data was inaccurate.

Now, NetApp has a 97.5% contact rate, Jorgensen noted. “That’s huge, as we’re showing that marketing is doing everything we can to provide the right data so that a contact has been made.”

Net App’s marketing lists came from several different sources, including trade shows, webinars and database vendors, and each had its limitations, including inaccurate and missing data. Some show attendees turned over a business card to be entered to win a giveaway. Some badge scans were missing crucial data points, such as phone number and company name.

While a nurture program requires basic information, such as a name and email address, inside sales needed far more detailed information, including company name, phone number, address and where the target is in the buying cycle.

Sales reps would make three or four outreach calls only to find out that the person they were trying to reach had no authority to act on their request for an appointment. It wasted time and money.

Jorgensen said LeadJen has helped the marketing team justify its investments in trade shows and other marketing activities. “We’ve invested in a variety of marketing activities, but for us to show a return on investment in a trade show, for example, a certain amount of lead generation has to happen. And since our go-to-market strategy relies on participating in a national conference circuit, it is imperative that we have a data set that is as complete as possible to take back from a trade show.”