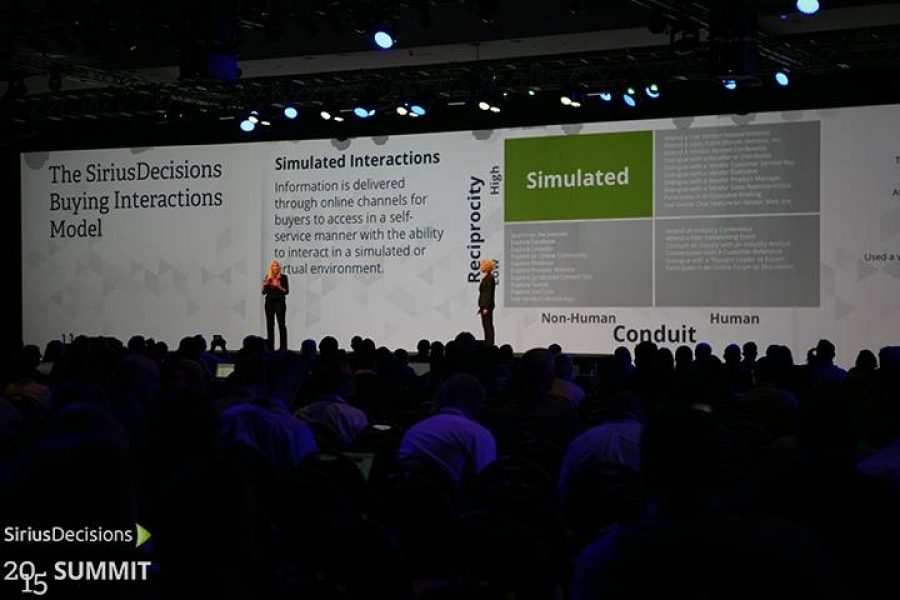 Many B2B industry executives and analysts believe that salespeople are being displaced by the ubiquity of digital. However, that myth has been exploded by the initial findings of the 2015 B-to-B Buying Study unveiled at the SiriusDecisions Summit 2015 in Nashville, Tenn.

This widespread viewpoint is partly based on SiriusDecisions’ own research that “67% of the buyer’s journey is now done digitally,” and compounded by similar sentiments from Forrester Research, Gartner and Corporate Executive Board.

However, the reality is that “B2B buyers interact with providers in a variety of ways throughout every phase of the decision-making process,” said Jennifer Ross, Senior Research Director, CMO Strategies at SiriusDecisions.

Examples include everything from touring an online demo to attending a vendor-hosted webinar or a peer networking event. In addition, Ross said human-to-human interactions are used more frequently at higher expenditure levels, but even in lower-priced offerings, there was evidence that personal interactions occur.

“Price point was one of the key indicators of buying behavior, which is reflected in the number and type of interactions,” Ross said.

Ross and her colleague, Marisa Kopec, VP and Group Director at SiriusDecisions, discussed the results of the survey during a presentation at the four-day sales and marketing conference. The survey polled 1,005 respondents, 86% of whom had purchased a B2B product or service within the past 90 days. The study was based on the human cognitive process when making a decision to purchase.

Ross and Kopec said B2B organizations are making strategic funding decisions based on broad marketplace assumptions, rather than an understanding of buyers and their behavior.

In conjunction with the survey, SiriusDecisions unveiled its B-to-B Buying Decision Process Framework. This blueprint outlines three types of buying scenarios — buying by committee, buying by consensus and independent buying — that need consideration when designing a go-to-market strategy. Each scenario has a typical price range, a typical timeframe and a range in the number of people involved.

“We believe it will change the way you develop your go-to-market strategies,” Ross told the audience. “There is not one buyer’s journey.”

A live poll during the session revealed that 37% primarily purchase by committee, while 53% of the audience indicated they largely take a consensus approach.

However, Kopec advised using the framework as a guide for creating a strategy, since interactions are episodic rather than sequential.

“Use primary and secondary research to understand the true interaction and consumption patterns of buyers, then align content and interactions to a sequential decision framework,” she said.

The SiriusDecisions Buying Interactions Model breaks down the modes of interaction into quadrants — non-human vs. human and low vs. high reciprocity. There are four types of interactions, according to Kopec:

Kopec said a go-to-market strategy should include a balance of non-human and human-to-human interactions. “Digital is pervasive across both of those types of interactions,” she said. “It’s time to pull the pendulum back. It’s not a digital interaction vs. a sales interaction. Digital facilitates those interactions.”

The impact of those interactions, according to respondents, was overwhelmingly positive, with the majority characterizing interactions as either somewhat or very positive.

And sales reps aren’t the only human interactions required to facilitate buying decisions; subject matter experts also influence decision-making, according to the study.

“It’s not about marketing and sales alignment,” Kopec added. “It’s about alignment across the whole organization.”

A campaign framework for marketing and sales must be based on an understanding of the interaction patterns and content preferences of the buyer audience, she said.