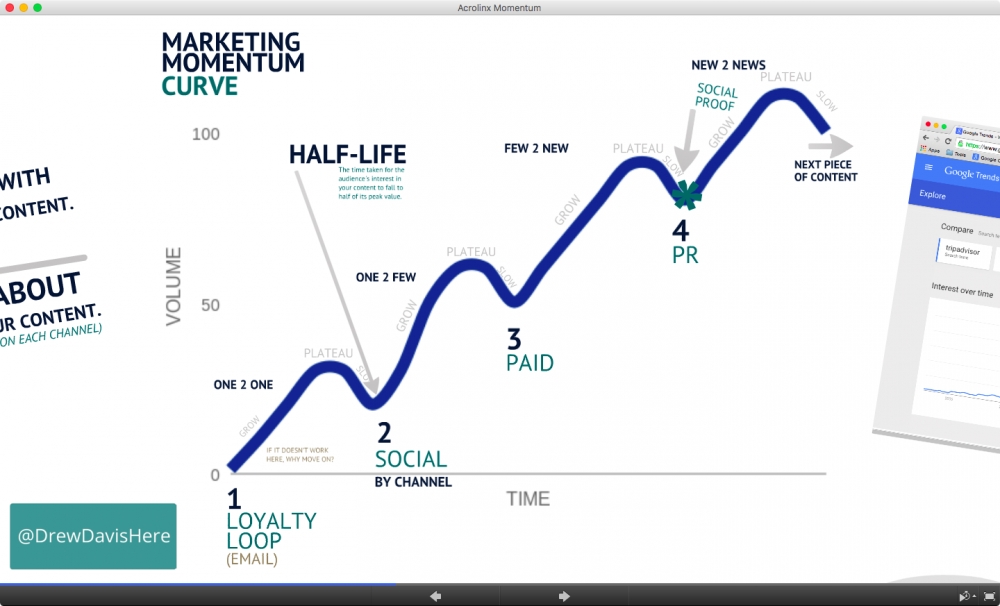 I spoke with Andrew Davis, bestselling author and founder of the marketing thought leadership talent agency Monumental Shift, in tandem with his keynote address at this year’s MarketingProfs’ B2B Marketing Forum. Davis said many B2B companies are prioritizing “going viral” and finding those spikes in analytics, rather than building their distribution strategy for continued success.

“The main message is to stop being addicted to the peaks of your marketing activities and start building your valleys,” Davis said. “It will drastically change the tactics you use to build your business and expand your reach.”

Below are four steps Davis advised that can help companies enhance their content marketing initiatives by reformulating a distribution strategy and focusing on the metrics that matter in a content strategy — instead of quick hits.

1) Distribute To Your “Loyalty Loop”

ADVERTISEMENT
B2B companies have gotten into the habit of distributing content that isn’t contextual, relevant or valuable to their audience — “vomiting” their content to every channel possible, according to Davis. To avoid that, he suggests connecting with your closest customers (your “Loyalty Loop”) to share new pieces of content and guaranteeing that the content you are producing is on point with what your current and prospective customers need.

“Essentially, it goes owned first, then paid, then earned,” said Davis. “That's your primary goal: have an audience. The first step is to identify what you'll create on a regular basis that will engage your owned audience. [This includes] sharing it with your current clients to make sure they like it first.”

Davis added that this can also “save your team budget” by identifying topics and formats that will likely benefit your prospective customers.

Davis said that marketers are diluting their efforts with “spray and pray” tactics via multiple channels to try and engage with as many prospective customers as possible. However, he emphasized that it is more valuable to focus on a single channel that has demonstrated value to your company in order to prevent a saturated response to how your audience engages with that content. Once that channel has been leveraged efficiently, marketers can move on to their next valuable channel.

In-depth reporting and analytics is what helps identify the channels that offer the most value, and this is often where marketing teams struggle, according to Davis.

“I think marketers are in a tough spot because there is a big difference on what they should measure and what they should report,” he said. “It certainly depends on reporting. Ultimately, you should be reporting on how you — and your content — contribute to revenue.”

Once you have reached the point where you’ve engaged your current and prospective audience, then it’s time to start considering paid media opportunities to reach unidentified prospective customers. Based on prior engagement with that content in the last two steps, you will have deeper insight to take a more targeted approach with your paid media initiatives — leading to a higher possibility in potential ROI, according to Davis. As you move to paid media, you’re looking to find prospects that look like your owned audience, he said.

You have to prove your value to the media before they buy into sharing it. You have to actually “earn” it. To do that, you have to build trust with media sources by making yourself available to them at all times. Doing so makes you top-of-mind with journalists in the space — ultimately leading to them valuing your input.

Davis suggests following the “Waterfall Effect,” where you start at your earned media goal — for example: The Today Show — then “swim upstream” to identify where they are getting their information from and building a relationship with those sources.

“You have to start asking ‘who influences my influencers?’ It will change your entire approach to public relationships by making it easier to engage with PR in a new and newsworthy approach,” said Davis.