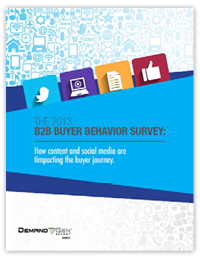 Additionally, nearly two thirds of buyers indicate that content had a significant influence on a decision. While the buying process is getting longer and buyers continued to wait to engage with sales, B2B buyers are more satisfied with the process than they were a year ago.

Those are just some of the preliminary results of Demand Gen Report’s2013 B2B Buyer Behavior Survey. A total of 150 B2B buyers were involved in a major purchase during the past 12 months, revealing some striking trends observed during the purchasing process.

When asked to rate the overall experience of their last major B2B purchase on a scale of 1 to 5 (with 5 being “very positive”), respondents answered with an average rating of 3.95, with 79% of buyers rating the experience with a positive “4” or “5.” This is a vast difference from the 2012 B2B Buyer Behavior Survey, in which only 21% of buyers felt satisfied with their last purchasing experience.

The Internet is still the primary destination for buyers who are searching for a new solution, with 45.9% of buyers listing “web search” as their first source of information. The leading choice for both the second and third ranked sources was vendor web sites. With “peers/colleagues” coming in right behind vendor web sites as the preferred alternative, it is apparent that word-of-mouth is still vastly important to anyone looking for a solid product recommendation.

Social media still ranked behind web search, vendor web sites and peer/colleague recommendations, but buyers are using it in targeted ways. For the 72% of respondents who said that social media played a role in their research, 57% reported browsing existing discussions to learn more about the product in which they had an interest. Almost one quarter (22%) of social media users asked for suggestions and recommendations from other users, and the same number said that they connected directly with vendors through social media.

Blogs were considered by 46% of buyers to be the social media channel with the biggest impact on the researching process, while 41% believed LinkedIn was best suited for that purpose.

The buying process has become even longer, as buyers continue to wait longer to engage with a salesperson. As many as 41% of buyers said they waited longer to initiate contact with B2B vendors than they did a year ago, and at least 33% of buyers said their purchasing process took longer than it did a year ago. Buyers typically do not initiate direct contact with vendors until they conduct fairly thorough research, which includes visiting the vendor website to browse general educational content. Almost half (46%) of buyers still prefer creating a short list of vendors before making the decision to communicate with a sales rep, illustrating that purchasers still want to provide themselves with choices.

Nearly two thirds (64%) said a vendor’s content had a significant impact on their buying decision. According to the survey, 34% of respondents strongly agreed that the winning vendors provided a better mix of content to guide them through each stage of the researching and decision-making process. The support from buyers indicates that diverse content, when deployed appropriately, can largely influence the success of a deal.

The amount of people involved in the purchase process remained predominantly unchanged from the 2012 survey. Last year, 50% of processes involved one to three people, compared to 54% in 2013. As many as 37% of purchases in 2013 involved four to seven people, relatively unchanged from the 38% from 2012. However, more than one third (34%) of B2B buyers did say that the number of team members working on the process increased over the past year.

Most of the buyers involved in the research process are either working in sales or marketing teams (55%) or are a senior executive of their company (34%).

The survey also included an open-ended question, which asked respondents to share what could have been done to improve the buying experience. Responses included having better insight into pricing and product comparison, less focus less on selling and more communication, more support during the implementation process and having access to content relevant to the individual buyer. Multiple respondents cited no problems with their experience at all.

Fill out the form below to receive a complete version of the 2013 B2B Buyer Behavior Survey when it becomes available.