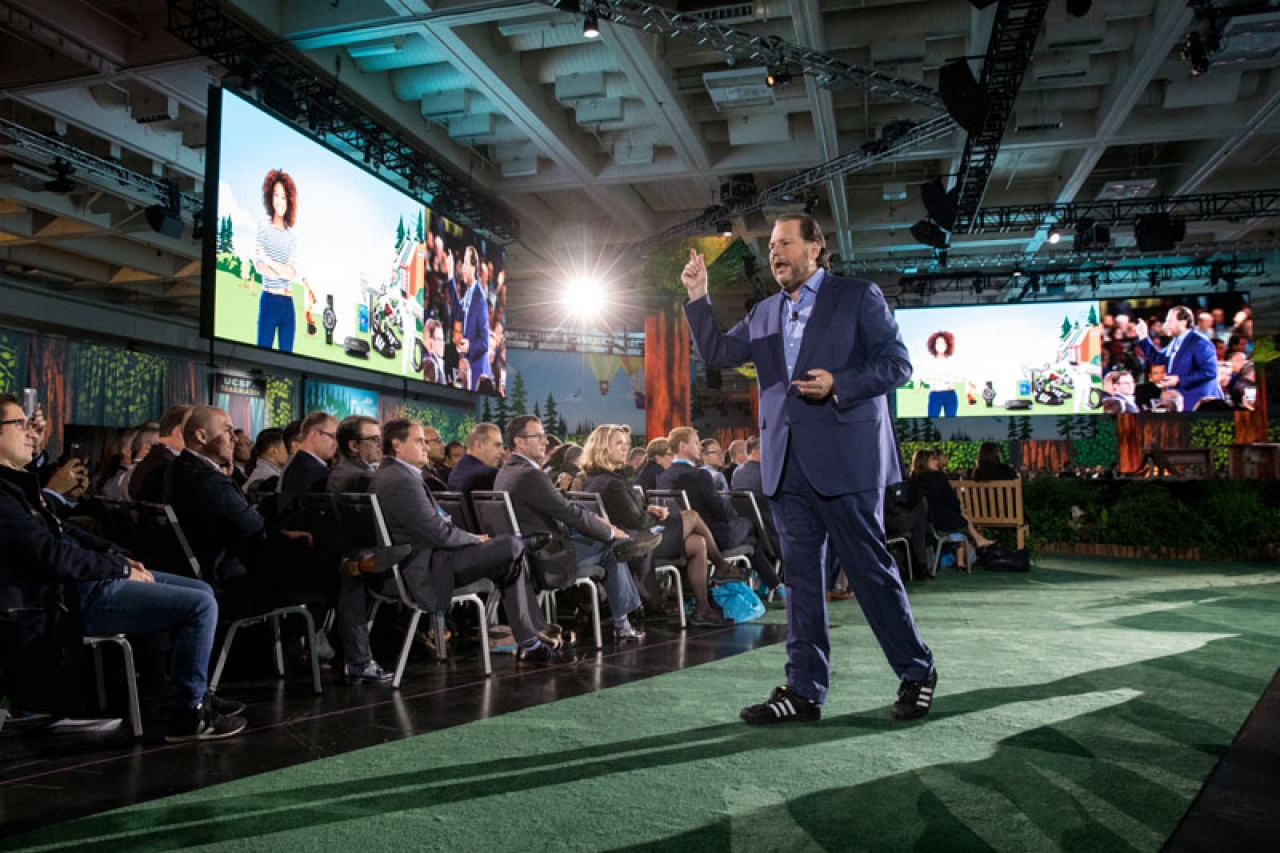 B2B marketing and sales teams are looking to their tech stacks to execute complex campaigns and deliver more personalized customer experiences to meet buyer expectations. This has driven much of the conversation this year at Salesforce’s annual Dreamforce conference, and company Founder and CEO Marc Benioff calls this development the “fourth industrial revolution.”

Spearheading this revolution is the ever-growing presence of artificial intelligence (AI) within the technology being used by today’s B2B marketing and sales teams. This revolution has been driven primarily by customer expectations and buyer needs, according to Benioff.

“This fourth industrial revolution is all around us, and I’ve seen that in our customers and in their stories,” Benioff said during his opening keynote session. “These success stories are being driven by state of the art technology that are all around us. What I’m most inspired by is all the innovation coming from companies tapping into these technologies.”

The event, with 2700+ sessions, 171k+ registered onsite attendees and another 10M+ online attendees, focused heavily on how innovative, “smart” technology is bringing companies closer to the customers. Benioff added that these technologies — especially artificial intelligence — are positioning B2B companies to become more consumer-focused, making them evolve into “B2B2C” companies by staying connected with the customers, as well as the accounts they engage.

In one example, Benioff highlighted the elevator and escalator company KONE, which has pivoted its product to become “smart” elevators that can predict when maintenance is required and to enhance the user experience.

Salesforce has gotten behind this revolution by unveiling new features and tools for its Customer Success Platform, designed to give users the tools they need to have smarter, personalized customer experiences. Of these announcements was myEinstein, which positions users to build custom AI apps across Salesforce without the need for data scientists. One notable feature from myEinstein is Einstein Prediction Builder, which enables customers to automatically create custom AI models that can predict outcomes from any field or object in Salesforce. The new features come a year after Salesforce unveiled Einstein prior to its 2016 Dreamforce conference.

“Salesforce is already customized to the user; more than 80% of records in Salesforce are on custom objects,” said John Ball, SVP and GM of Salesforce Einstein, during a keynote session highlighting the new AI capabilities. “Users are taking Salesforce and making it their own.”

Salesforce is fueling AI adoption by incorporating it throughout its Customer Success Platform. Experts noted that building off customer expectations and use cases positions the company to further enhance its AI algorithms.

“To fully understand AI, you need to understand social context and visual input; it really needs to be complete like human intelligence,” said Professor Richard Socher, Chief Scientist at Salesforce, during a Fortune CEO Series panel. “In sentiment analysis, for example, you can break words down into positive/negative and sum it up. Then you can keep adding complexities to it until you have an ‘accurate’ algorithm.”

AI has been building off the familiar “if this, then that” formula found in automation systems. For it to meet expectations, companies are working to position AI to get as granular as possible across multiple tasks.

“What AI has solely focused on is taking one task, one concrete data analysis,” said Socher. “There is still little transfer between different tasks, which replicates human intelligence.”

Speakers agreed that there are still complexities that are caused by a shortage of data scientists to crunch the data and identify the algorithms that are right for their business. According to IBM, annual demand for data scientists, data developers and data engineers will reach nearly 700,000 openings by 2020.

“I know that it takes a lot of work to bring this type of intelligence into your business,” said Shubha Nabar, Sr. Director of Data Science at Salesforce Einstein, during the keynote session. “You need intelligence and there are hidden complexities. You must have data preparation and integration at scale, modeling and data science at scale, infrastructure and context.”

But Salesforce’s new services and features for Einstein are aiming to cut out those complexities but performing those tasks “under the hood.” This enables users with no data science background to make the most of their database to build accurate predictions.

“We had to build AI that builds AI,” said Nabar. “We've taught Einstein to build the best predictive model for your use case. Predictions are only good as the data you feed them. Salesforce uses Einstein metadata to analyze the users’ objects. Relevant info is automatically identified. It then builds a multitude of models and it identifies the model with the highest accuracy.”

Attendees Vocal On The Growth Of AI, Impact On Business

Here are a few comments from attendees about the growth of AI, Salesforce’s recent Einstein announcements and what needs to happen for AI to reach it’s potential.

“It’s validating and exciting to see Salesforce make such real investments in AI and ABM with Einstein ABM. AI is certainly the future and we agree that the power of AI lies in making things more accessible and customizable, and giving people the tools to do their jobs better. However, full AI adoption will require finding ways to ameliorate the underlying feeling of stress caused by the fourth industrial revolution. Ultimately, we need to figure out how to bridge the divide between people and AI. We have learned that there are ways to accomplish this by having AI-driven applications take human feedback and provide transparency on its recommendations, but also given end-users the turn off switch.”
– Aman Naimat, SVP of Technology, Demandbase

“In order for AI to work well, it's critical to have a solid set of data. After all, AI is a computer program and, as the saying goes, ‘garbage in, garbage out.’  So, marketing people need the most complete and accurate data they can get on marketing campaign performance.  So that's why, at Full Circle, we are focused on delivering the best marketing data stored right inside Salesforce that feeds and powers Einstein.”
– Bonnie Crater, President And CEO, Full Circle Insights

“The announcement of myEinstein and its Einstein Prediction Builder was one of the main emphases of the keynote. This allows Salesforce administrators to build their own predictive models to help anticipate customer activity, such as predicting which customers are attrition risks and immediately directing this information to sales representatives. While this analytics capability is impressive, it's critical that intelligent process automation is applied to these models and predictions to translate this information into smart action. When tied to automated workflows, organizations could leverage myEinstein to predict not only customer activity but which person within an organization is most likely to review a contract the fastest or is the most available to sign a document, for example.”
– Matt Fleckenstein, CMO, Nintex

“The themes for Dreamforce this year revolve around the Fourth Industrial Revolution and the age of intelligence. For Salesforce, that translates into the continued growth and use of Einstein AI throughout the Salesforce platform and apps, the healthy growth of its ecosystem and the improved and expanded ability to customize and brand apps built on the Salesforce Lightning platform. The introduction of ‘My’ versions of the core platform — the apps clouds, Einstein, IoT, Lightning, etc. — support declarative no code, low code and code development, and the ability for customers to produce deeply branded mobile applications.”
- Michael Fauscette, Chief Research Officer, G2 Crowd

“From the announcement today, the direction of Einstein is clear, but there is still progress that must be made before it is adopted industry-wide. First, Salesforce will need to master the elements of calendar and email that sales reps care about, and be able to provide reps with the data they want. Then, to ensure the success of Einstein, Salesforce will need to leverage its position and strength in the industry, similar to what is being done with Lightning. There has been a struggle with the adoption of Lightening, but Salesforce is incentivizing partners to support Lightning and building some new features only into Lightening. I would think a similar strategy would be used for Einstein."
- Chris Rothstein, CEO, Groove.co