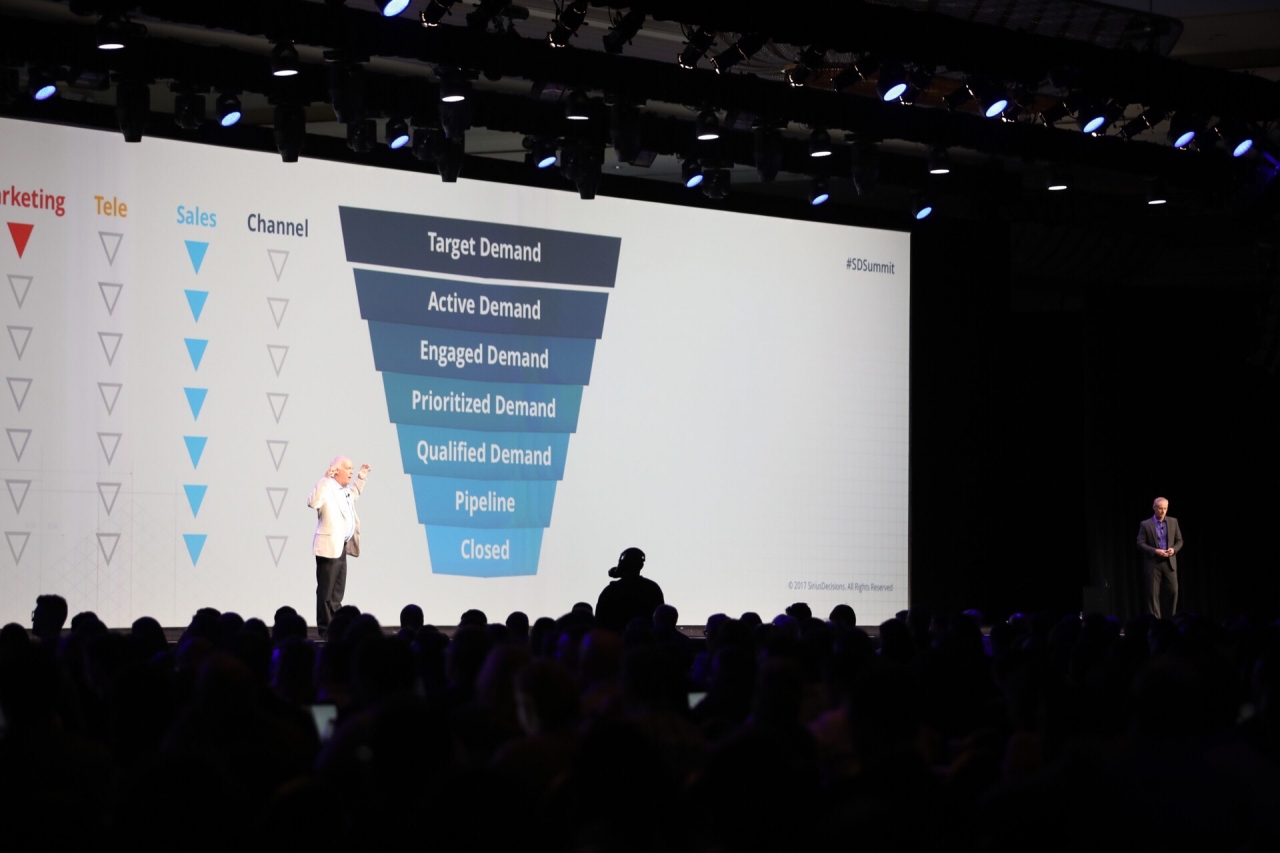 The SiriusDecisions Demand Waterfall has transformed the way thousands of B2B organizations have approached, managed and tracked lead management over the past decade. This week at the SiriusDecisions Summit 2017 in Las Vegas, that iconic framework was transformed to address many of the fundamental shifts towards account strategies, personalization and the need for greater precision in measuring pipeline impact.

SiriusDecisons unveiled the new “Demand Unit Waterfall” to a warm reception of more than 3,000 attendees at the Summit.  The new framework features an increased focus on buying groups, rather than the progression of individual leads or inquiries.

Introduced by Terry Flaherty and Kerry Cunningham, both Senior Research Directors with SiriusDecisions, the new Demand Unit Waterfall addresses the realities of engaging buying teams, as well as incorporating new tools and tactics such as predictive analytics and intent monitoring.

While the original Demand Waterfall (which rolled out in 2006) was designed to track activity once a buying journey had begun, Flaherty explained that the new framework was positioned to help companies better define and target their total addressable market.

ADVERTISEMENT
The Demand Unit Waterfall adds two new stages—target demand and active demand—which are aimed at identifying target buyers before they have raised their hand or self-identified on your site.

Flaherty said that the new Demand Unit Waterfall addresses many of the gaps and inconsistencies B2B organizations have faced as they have tried to shift to focus more account-based strategies and better align with the metrics of their sales teams.

“The existing model starts with an inquiry, which is when an individual hand is raised,” Flaherty said. “The reality is B2B buying decisions are made by multiple people and with more organizations aimed to drive coverage and engagement across target accounts, there is a need to change how companies define and track key stages of engagement.”

The complete progression of stages in the new Demand Unit Waterfall include:

Two key components in the new Waterfall model are the focus on buying groups and the concept of Demand Units.

Cunningham said that many B2B organizations have been too limited in defining their target markets, because they were focused on either individual buyer personas or accounts.

In building the new Waterfall model, SiriusDecisions has focused more on buying groups, which are defined as “a collection of personas involved in the process to buy an offering.” This could change for different companies based on different lines of business, geographies, job functions or roles in the purchase process.

Cunningham further explained that a Demand Unit “consists of a buying group that has organized needs the organization is challenged with,” and Cunningham suggested B2B organizations should define buying groups and demand units based on the characteristics of having “relationships, resources and needs” established.

“Organizations may have many demand units, depending on different solutions they sell, and each will have their own unique needs and requirements,” Cunningham added.

Because the new stages and definitions in the Demand Unit Waterfall are better aligned with actual buying scenarios, as well as the criteria sales teams are using, Cunningham predicted the new model will provide much more accurate measurement perspectives for marketers focused on attribution.

“For the math in the old waterfall, it looked like every inquiry should be converting at the same rate, but in reality you could have five inquiries from the same account, which dilute conversion rates,” he said. “Now marketing and sales organizations will have a more accurate view of how they are doing against targeted accounts and how engaged accounts are converting.”