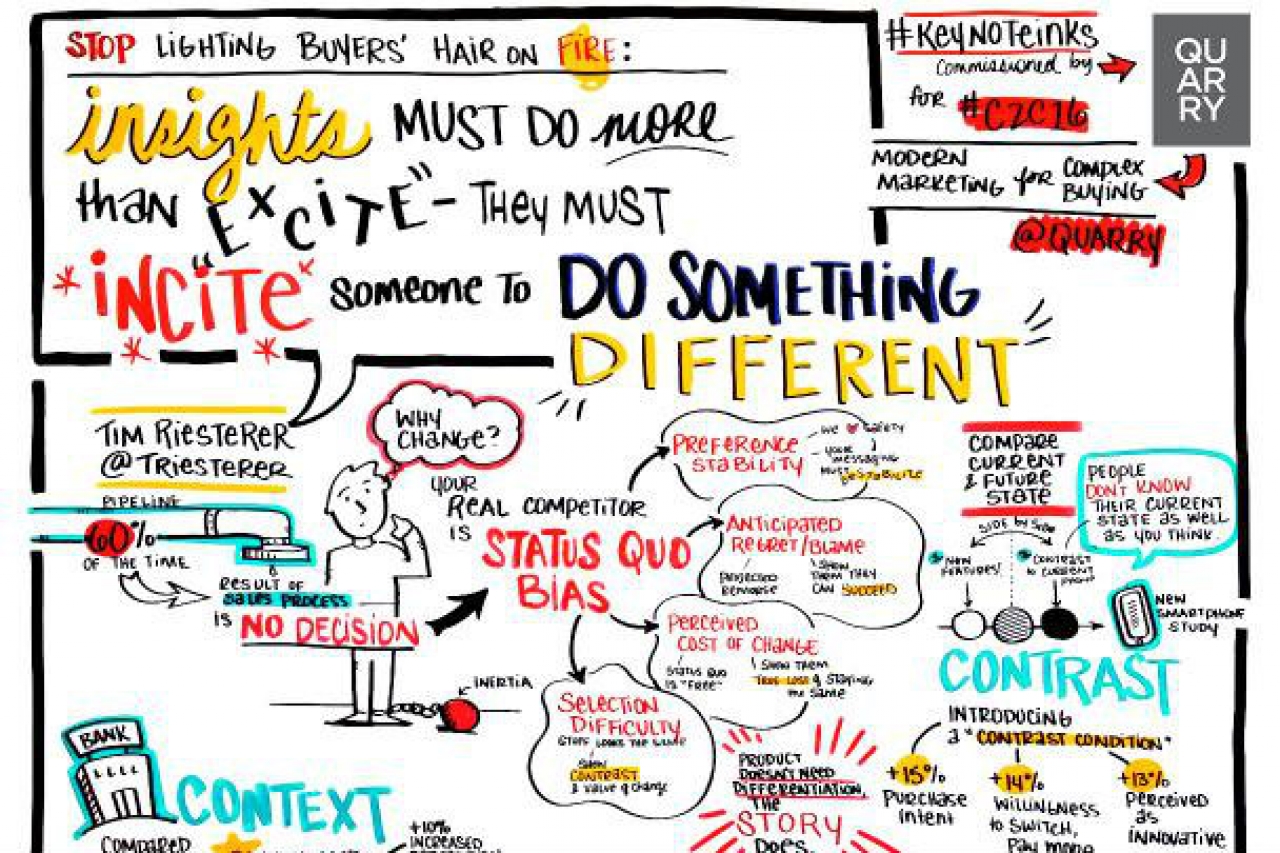 An overwhelming majority (85%) of content marketers are taking an insights-based approach to selling, according a recent survey by Corporate Visions. But are those insights being used to just excite buyers, or incite them to make changes in their approach to marketing?

That was the question from Tim Riesterer, Chief Strategy Officer of Corporate Visions in his keynote address at the B2B Content2Conversion Conference in Scottsdale, AZ.

“You can’t just set [prospects] hair on fire and just introduce uncertainty without providing a way to resolve their issues; they’re going to just think you’re a jerk,” Riesterer said.

ADVERTISEMENT
A majority (60%) of B2B companies will stick with the status quo after going through the pipeline, he said. “Just 24% choose your solution, and 16% go with a competitor,” Riesterer told the audience. “Your biggest competitor isn’t the other guy. It is the status quo. Inertia is the enemy. The goal is to incite them to do something different than they did yesterday, and do it with us.”

#1. People prefer stability. “Your message has to move someone to destabilize their preference for the status quo,” Riesterer said.

#2. Anticipated regret. “People already have buyer’s remorse before they buy,” Riesterer noted. “Our job is to show them how people have succeeded on the other side. You have to help them picture themselves as the hero.”

#4. Selection difficulty. “Some marketers have what I call the ‘Mighty Mouse’ syndrome, which assumes that your customers are damsels in distress who need to be saved,” Riesterer said. “You have to present a more powerful reason to select your company.”

Citing research that Corporate Visions conducted with the Stanford Graduate School of Business, messaging that presents an unexpected need first is the most persuasive. “When you introduce an unconsidered need first, it creates a sense of urgency and destabilizes the buyer’s preferences.”