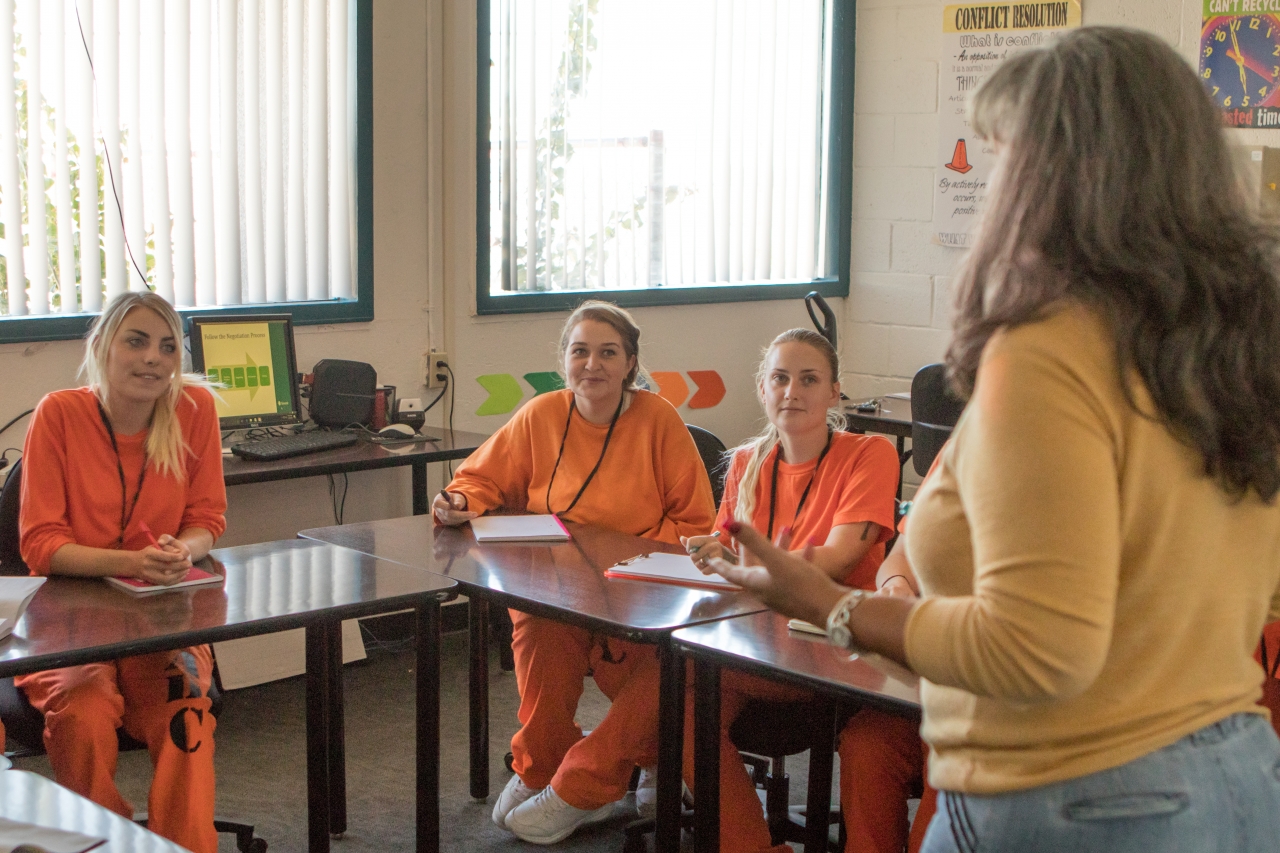 The topic of Televerde’s “workforce” has drawn a lot of comments and whispers over the years. Sometimes, there is a bit of a sarcastic tone attached as it’s referred to as the “prison company.” Other times, there is an insinuation that women in correctional facilities aren’t worthy of investment, either because they're in prison or because of the belief that they aren’t capable of real change.

ADVERTISEMENT
Last year, I had the opportunity to visit the all-female Perryville Prison Complex in Goodyear, Ariz., part of the Arizona Department of Corrections, where more than 300 of the incarcerated women there are selected and then trained for the Televerde program. The women who are chosen from the prison population to become a Televerde employee are carefully screened for skills, and if selected are paid minimum wage for their work.

I have to admit that the first time stepping inside a prison was a bit unnerving, as you feel like you are walking into an episode of “Orange Is the New Black.” I likely went in with some of my own prejudices, and the experience helped me realize we are unfortunately trained by society to judge incarcerated people negatively — viewing them simply as criminals who are less trustworthy or sympathetic, rather than thinking about how to help them overcome past challenges.

However, I walked away from meeting with a small group of women participating in the program with a vastly different opinion of Televerde’s program.

Here are a few of the misconceptions that were corrected during my visit that should be of interest to anyone in marketing and sales, as well as some perspective on bigger issue views that were ultimately challenged for me:

Beyond Dialing For Dollars: Don’t Call It A Cold Call

It only took about five minutes of being inside the facility to blow up any perception I may have had of the old chain gang image of women simply cranking out phone calls. These women all easily rattled off pipeline stats about the amount of revenue and opportunities they had generated. They were also very comfortable talking about multitouch campaigns, Level 2 leads versus Level 4 leads, hand raisers, conversions, business outcomes and a lot of the other vernacular/language only people entrenched in performance marketing speak.

I had the opportunity to meet with Samantha Garcia, who leads the training and development program for Televerde inside the Perryville facility. She walked me through the intensive training the women go through to be a part of the program, which starts with a detailed screening.

I learned that being a part of the Televerde program is something of a badge of honor for these women to have been selected as an employee. To find employees who will be successful in the program, Televerde hosts job fairs and screens and interviews women for their skills and other indicators that signal if they’d be a good fit for the program.

Once selected, employees go through a new hire “mini bootcamp” that consists of about 80 hours of classroom training, where they learn about everything from technology to the buyer journey to the SiriusDecisions models. Once they graduate from the new hire onboarding, they are advanced to what Televerde refers to as a “nesting period” of approximately 40 hours where they place phone calls and work closely with “mentors” on their soft skills.

During the nesting period, agent performance managers and mentors can determine if new employees require further training. Once they are fully in their role, employees have the opportunity to advance from roles such as lead development reps (working mostly top-of-funnel on the phone) to sales development reps (who work on more complex campaigns involving multiple product offerings that address top-, middle- and bottom-funnel leads), all the way up to inside sales reps (who work directly with account reps from cold to close and often participate in proposals/quotes).

To illustrate just how impressive and passionate these women are about the work they do, I asked the group how they felt about “cold calling” busy executives who often don’t want to pick up the phone and rarely have time for interruptions. One of the women quickly fired back at me, “I don’t know if you’d consider it cold calling if you knew the amount of research I do on the people I’m calling. I often know as much about what’s going on inside their companies as they do.”

To summarize this point, any misconceptions I had that these women were just cheap labor dialing for dollars was quickly thrown out the window. I’d challenge any sales and marketing executive to visit and have a conversation about the day-to-day approach and strategies of demand generation with the woman inside Perryville.

Here are some interesting stats regarding Televerde’s program:

3,000 women have been through the program;

$8 billion impact on pipeline, in terms of influencing client revenue;

6% recidivism rate for Televerde program graduates versus statewide rates, which can be as high as 70%; and

$25 million in annual savings for the state of Arizona and its taxpayers, by helping to keep hundreds of women from returning to prison (based on the average cost of $23,826 to house an inmate).

Next, I learned that the work these women are doing inside the facility extends far beyond lead and sales development. For example, one of the employees I spoke with was a certified Marketo admin, and on a daily basis works inside the Marketo instance for several large clients (a few that are Fortune 500 name brands), building landing pages, setting up nurture campaigns and analyzing campaign performance.

She lamented how many companies deploy powerful tools such as Marketo, but then don’t have the time or the expertise to utilize all the functionality of the systems and settle for using them as email tools. She shared how she was working with SmartLists and other tools to help improve the results for several clients, and also spending a lot of time on data cleanup. “I had a background in data and reporting, so I’m very particular about tagging and clean data,” she said.

In addition to working in Marketo, some of the more experienced employees from the inside talked about using tools like DiscoverOrg and InsideView to perform TAM analysis for clients, as well as helping with named account mapping strategy to support ABM initiatives.

Another employee from the inside was a systems configurator working on dashboards and doing SQL programming, while another was a certified systems analyst for Tibco who had earned the nickname of “MDM (master data management) queen.”

To summarize, these women are not only extremely well-trained and well-versed on all things pipeline and performance marketing, but many of them have also developed technical skill sets that are in high demand in our industry. Illustrating this point, 30% of women transition from jobs inside correction facilities to employment in related careers outside.

Moving From Broken To Impactful

Finally, the visit woke me up to the social conversation and the potential impact true rehabilitation (which in reality is supposed to be the goal of our corrections system) programs can have.

In the brief time, many of the women shared and discussed how they wound up “inside” and most of them took responsibility for where they landed. One said, “I came from a good family that gave me a great life. I wasn’t supposed to end up here.”

However, nearly all of the women also described themselves as “broken” after arriving inside. And they all described Televerde as giving them new hope, new confidence and to some extent, a new lease on life. Most of the women confidently described looking ahead to careers in sales, marketing or technology once they were released, and credited the Televerde employment as preparing them for success.

After getting certified in advanced programming, one of the women said, “When I go for a job on the outside, I don’t want to just be successful. I want to have an impact.”

But the reality for these women is that finding a new career path and new skills is just one part of successfully integrating back into society after being incarcerated.

In addition to meeting employees who are still incarcerated, I had the chance to sit with three women who recently “graduated” and were now working as full-time employees at Televerde’s offices. Currently, about 50% of Televerde’s team at its corporate headquarters in Phoenix are graduates from Perryville; this includes positions in every division of the company.

Both of the women said the professional transition to their new role in the headquarters office was fairly seamless, thanks to their training and experience on the inside. But they admitted the “re-entry” back into the outside world was more of struggle. One was struggling to get settled as a mother to her three-year-old child, while the other talked about prioritizing sobriety and influences.

To help support the women after they are released from prison, Televerde’s former CEO Jim Hooker and Chief Operations Officer Vince Barsolo helped create Arouet Foundation in 2011. Arouet not only helps with career counseling and job placement, but also provides mentoring services and helps with finding housing and support for a successful transition. The program is credited with helping reduce recidivism after release to approximately 6%, which is significantly lower than the national averages of between 50% and 70%.

In order to learn more about the women at Perryville, I’d strongly suggest people in the industry take the time to watch the videos from the TEDxPerryvilleCorrectional event called “Behind The Curtain.” The program features powerful presentations from several women incarcerated at Perryville and provides a different perspective on the human side of incarceration.

Ultimately, after reading this story and taking the time to watch the TEDx videos, I would hope that the flippant comments and opinions people in the industry have expressed about the Televerde workforce will at least become more informed.

It’s hard to ignore the positive results Televerde’s formula has had as the company has worked with major brands including SAP, Marketo and Pulse Secure, and generated more than $8 billion in revenue. But the impact the program has had in getting people like me to think differently about the labels attached to people who are incarcerated is significant, and even more important is the fact that the program has actually provided them with real paths to rebuild their lives. This is something everyone should applaud.