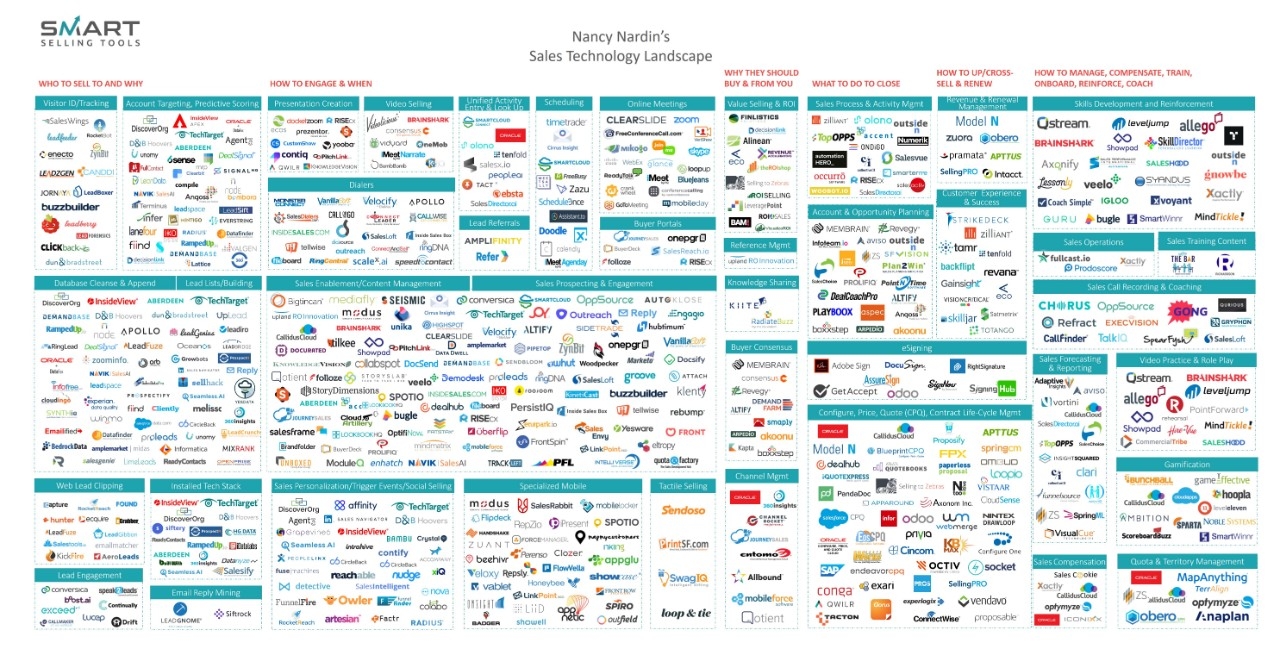 Much like martech, the salestech landscape — while still not as massive as Scott Brinker’s Martech landscape — is growing. There are now more than 500 distinct salestech solutions featured in Smart Selling Tools’ 2019 Salestech Landscape, an increase of 25% compared to 2018.

There are also a lot of investments being made in sales technologies. For example, in 2019:

While one-on-one, human interactions still play a very important role in developing strong relationships with buyers, research from LinkedIn shows that 73% of sales professionals are using technology to close more deals. Furthermore, 97% said that sales technology is either important or very important to closing deals.

Another emerging category in the salestech landscape is sales intelligence. These tools are designed to collect, integrate, analyze and present information to help salespeople find, monitor and understand insights and data on prospects and existing clients. Solutions in this category include:

Chorus.ai, a conversation intelligence platform designed to use AI to analyze sales calls.

Crystal, which is designed to help salespeople adapt their messaging based on buyer’s personalities.

As sales reps rely more on technology to boost efficiency and automate mundane tasks, industry experts note that it’s important to focus on the process and/or strategy before the tool. All too often, organizations purchase new solutions simply for their appeal, resulting in overlaps with existing technologies and an abundance of data that they don’t know what to do with.

Companies such as Zoom are steering away from “shiny new toy syndrome” and consolidating their salestech stacks based off their processes, key pain points and identifying gaps in the system to ensure all bases are covered and there are no overlaps.

Experts note that AI is also a key trend within sales technologies, as it is designed to help sales representatives do more with less and give them intelligence they can’t get on their own.

“There are still a lot of investments being made in markets that you might consider to be mature,” said Nancy Nardin, Founder of Smart Selling Tools and Co-Founder of Vendor Neutral, in an interview with Demand Gen Report. “For instance, sales intelligence and lead database-kind of services, which I find very interesting, because there's a lot of competition in that space. And I'm also seeing some new companies pop up in the compensation world, as well, for smaller companies. But clearly, the biggest trend is AI. For no other reason that it's being talked about a lot and there are a lot of investments being made. But people don't care if it has AI. In fact, it can make it seem a little scary. What they care about is how is it going to help them.”

“The first thing to do is really take a different perspective and not look at it from the technology point of view at the beginning,” said Nardin. “What you should be doing is taking an audit of what the friction points are in your sales process or sales management role and identify all of the different things that are getting in the way from selling more in less time. Only then can you prioritize to decide which technology you look at based on your problems, and which [tool] will have the biggest impact.”

This was a priority for Hilary Headlee, Heads of Sales Ops + Enablement for Zoom, a video communications platform. Quickly after joining Zoom, she surveyed the team about the sales tech stack and learned that everyone had a big problem with the tools.

“What really popped up around was that the tech stack was a problem — people didn't like it,” she said during a presentation at the 2019 TOPO Summit earlier this year. “There has been an ocean of data that doesn't have insights lately. And what that means is any tool that you buy and put in your tech stack has multiple data points with every tool that you add. And it’s just fueling us tons of data, but if you don’t have a process or insights around it, and you're not driving strategies, then you're not really helping your business.”

ADVERTISEMENT
But Headlee noted that it wasn’t the tools that her team hated at the end of the day; it was the lack of process and strategy that resulted in reps not utilizing the tools to their fullest potential. The tech stack needed a lot of cleaning up, as Headlee found that there was a lot of overlap with the tools. For example, the team had both SalesLoft and Outreach as its sales engagement platforms. So, she developed a tool catalog to first keep track of the technologies the team has access to, and then created a tool survey to identify the gaps and overlaps.

“The tool survey was important to me — I wanted to benchmark where we were at with all of our tools,” said Headlee. “To me, it [was about finding] what our reps saying about them. One major question out of the 20-question survey we asked was, ‘Do you overall feel you have the sales tools you need to be efficient and effective in your job?’ And actually 91% of people said that they did. But they gave other valuable feedback and said. ‘Yes, we have those, but we have these two gaps and we have these gaps in between,’ or ‘we love something like Outreach or Clari, but they are overwhelming us.’”

After gaining all of this feedback from the sales team, Headlee realized it was time to stop blaming the tools but acknowledging that the processes aren’t optimized to support them, or the team may just not be ready for the tool.

Now, every tool in the stack has a success plan, which Headlee said is simply asking the “who, what, where, when, why and how?” during the tool inventory. She began this process with the tier-one tools, asking questions such as:

She added that she ties it all together with the survey results, as well as vendor scores, to see if the team is able to maintain those tier-one tools and really get what they need from them.

“Please don't blame the tools or the people that bought it,” she concluded. “You have to own it and say, ‘here's our new process, here's how we're going to be moving forward with these different areas’ and trying to drive that. “If you can really focus on better systems and processes, your data and insights will be better, and your strategy and planning will be better. To unlock that and to realize that for your business, from an operational standpoint of operational and execution to strategy, really helps drive those areas.”

There has been no shortage of talk about artificial intelligence in B2B, but experts such as Nardin, as well as Tad Travis, VP Analyst for Gartner, highlight that AI in sales has become increasingly prominent.

“[Among] hundreds and hundreds of vendors, there's virtually not a single vendor that isn't introducing AI, and/or one of its various forms, to improve functionality,” Travis said in an interview with Demand Gen Report. “Every sales representative has a need to know you answer the questions, ‘What do I do next with this deal or what do I do next with this account?’ The emergence of artificial intelligence is reducing the inefficiencies that get in the way of answering those questions quickly and effectively.”

Some of the more interesting, AI-driven technologies Travis noted include:

“[Buyers] should ask the questions, ‘What and how is it going to save my reps time?’” said Nardin. “Because, there are two ways that AI can help. One is with efficiency: it can do things that sales reps could never do, because they just don't have the time or the ability. So, basically eliminating what sales reps have to do, or some of the steps that sales reps have to do. On the other side, AI can add intelligence that a sales rep can't get on their own, or a sales manager for that matter can't get on their own. So, if I was to sit with an AI vendor, I would say, why is it important that you have AI? How does that provide a level of efficiency or functionality that we can't get without AI? In other words, why does it matter?”