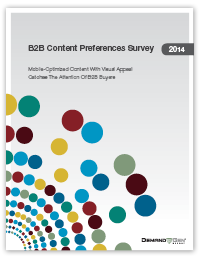 In Demand Gen Report’s 2014 Content Preferences Survey, B2B buyers revealed that they rely are placing a greater emphasis on visual content throughout the purchasing lifecycle. They are also accessing content much more frequently from smartphones and tablets. These trends have led to an even higher buyer reliance on content than ever before to assist in research and purchasing decisions.

Some of the study’s significant findings: