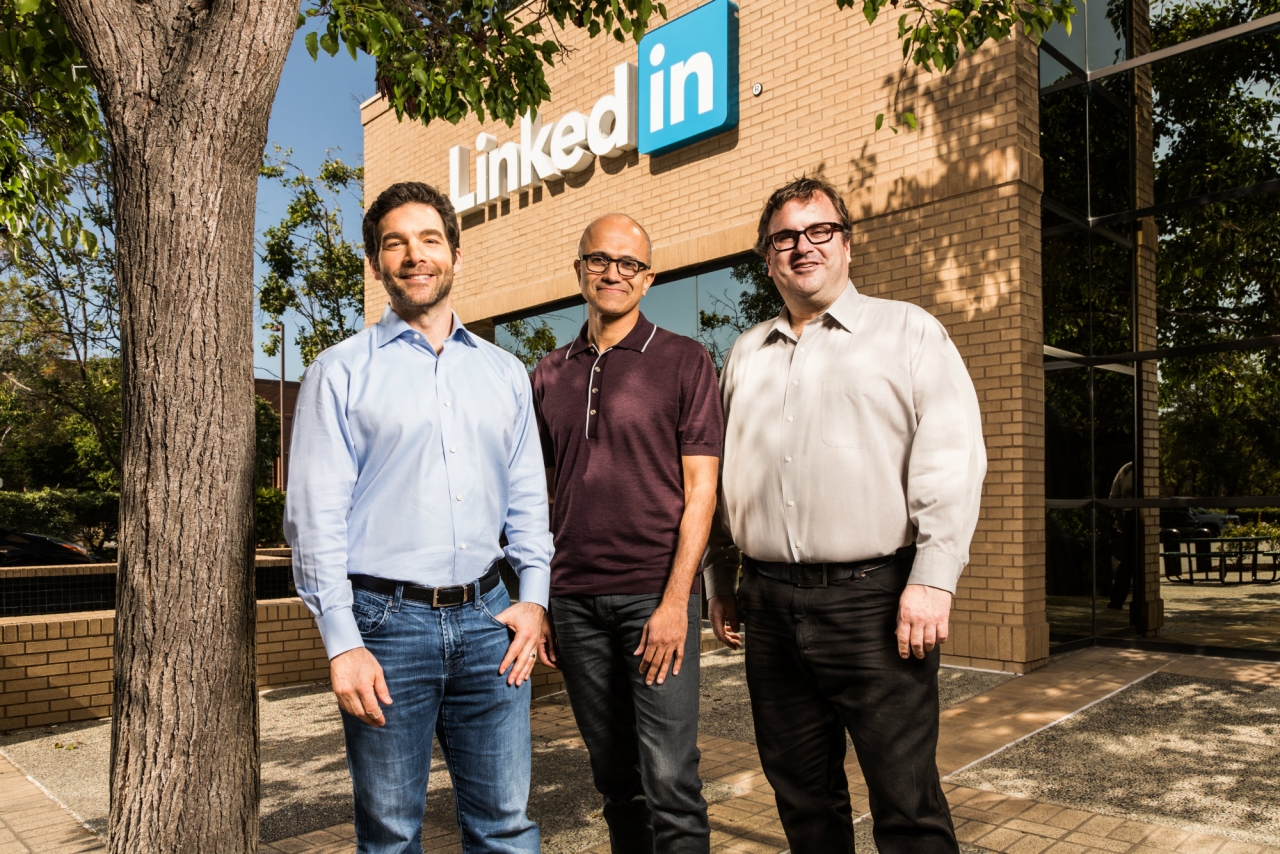 Microsoft announced a deal to acquire LinkedIn for $196 per share. The all-cash transaction is valued at $26.2 billion. The acquisition combines Microsoft’s professional cloud capabilities with LinkedIn’s extensive professional network to enable B2B sales teams to have more connected, intelligent and productive experiences, according to Microsoft.

ADVERTISEMENT
“When we talk acquisition, we think of three key factors: we think about the total addressable market, secular tailwinds in usage and technology and thirdly, is this something that can be at the core of Microsoft,” said Microsoft CEO Satya Nadella during a conference call to discuss the deal. “This acquisition checks all those boxes.”

“We’ve got a strong enterprise sales footprint, and we’re looking forward to expanding products in [Microsoft’s] bag to go beyond talent management and learning,” said Jeff Weiner, CEO of LinkedIn, during the call. “We have an ad sales force, and we’re now positioned to unlock new inventory there. [LinkedIn] Sales Navigator and Dynamics can now be taken to the next level by combining data intelligence and Microsoft CRM.”

LinkedIn’s extensive database, coupled with Microsoft’s insights from Microsoft 365, positions the company to enhance machine learning and predictive capabilities going into the future, according to Nadella.

“The opportunity for machine learning and predictive analytics is huge; it’s one of our biggest differentiators.” - Satya Nadella, Microsoft

“Now you can combine our insights with the information of LinkedIn to provide a lot of information that can be leveraged by machine learning," Nadella added. "This also greatly impacts LinkedIn’s news feed. Imagine [combining] all of Microsoft 365 data with LinkedIn to increase the relevancy of the information being shown in feeds.” Nadella noted that this can also “impact relevancy of ad targeting.”

“When building predictive solutions that give companies good decision-making power, having high-quality data within your CRM is critical,” said Radius CEO Darian Shirazi in an interview with Demand Gen Report. “Microsoft is making a very bold move so that cloud applications will have high-quality data. The combination of network-driven data and cloud solutions is a new way of thinking.”

"It really puts Microsoft in a position to own the next generation of business processes.” - Darian Shirazi, Radius

Demandbase founder and CEO Chris Golec noted that Microsoft’s acquisition of LinkedIn signifies the growing importance of the B2B market. “Large technology cloud companies are putting a high value on reaching business users — that’s part of the reason why Microsoft would pay a 50% premium to secure LinkedIn’s member base. The deal also demonstrates the importance of having a scalable system that provides better insights into business users. We’ll likely see Microsoft potentially use LinkedIn data across their CRM and advertising products.”

“I think for LinkedIn, it’s validity; It goes from an interesting novelty, from Facebook for business people, to part of the business ecosystem,” said Tim Riesterer, Chief Strategy Officer at Corporate Visions. “With as many members as they had, it was hard to say they were a novelty, but I think lots of people wondered: ‘Where does this go? Can it be monetized?’ I think this answers those questions regarding its permanence and role within the business ecosystem — it’s beyond just being a networking novelty.”

“LinkedIn is a tremendous asset for Microsoft to purchase; a large percentage of B2B companies rely heavily on LinkedIn's platform to prospect,” said Jon Russo, Founder of the B2B Fusion Group. “On the heels of Marketo getting acquired by Vista Equity, this could be another sign of industry consolidation in [and] around the marketing technology landscape.”

“I don't think anyone saw this coming,” said Analyst and Author Rebecca Lieb. “What Microsoft gets out of it is content, content, content. But critically, it's networked content. It extends Microsoft's reach into a vast network of professionals worldwide which is, after all, that company's core customer base.”

Lieb continued, “Data will benefit both parties. Because Microsoft is likely to build LinkedIn into the OS, as is their habit with acquisitions, user data will become very robust for both companies.”

Consolidation could continue with the possibility of more Microsoft acquisitions. Microsoft was recently named as one of the companies in the running to potentially buying Marketo, which was acquired by Vista Equity Partners for $1.79 billion in May. Microsoft’s hat was also thrown into the ring as a potential buyer when rumors started circling about Salesforce looking to sell.

With the acquisition of LinkedIn, industry experts noted that the possibility of Microsoft acquiring Salesforce is no longer likely.

“I can't see why they would buy Salesforce at this point,” said Paul Teshima, CEO of social selling solution provider Nudge Software. “Remember this is Microsoft's playbook: they are fantastic ‘fast-followers’ (maybe not so fast, but CRM is huge), and slowly but surely take over a market. I really do think this is a good move by Microsoft, and that they will now be in a position to take on Salesforce. They get over 400M business users, and the world's best business data asset.”

One change that Teshima noted is that LinkedIn may need to open up its platform for easier integration. “Microsoft is extremely partner friendly, and believes in developing an ecosystem. This could broaden the scope of integrated solutions available to customers.”

Microsoft will likely continue to evaluate acquisitions in the future, according to Mary Shea, Principal Analyst at Forrester Research. "That said they have been very strategic with the Lynda.com and now LinkedIn deals. If you buy the combined total addressable market of $ 315B for the LinkedIn/Microsoft entity then there is more than enough market opportunity as well integration and execution challenges for Microsoft to focus on in the near and mid-term to fully maximize the potential of the LinkedIn deal.
Shea added that the LinkedIn acquisition is a huge boon for Microsoft. "Microsoft has already been enjoying some good market traction with Dynamics, and now with the LinkedIn asset Microsoft will have more arrows in its quiver — in and above price — to compete head to head with Salesforce in the enterprise CRM space."
She suggests that, down the road, therer is a possibility for Microsoft to acquire one of the leading sales enablement players. "Perhaps one of the content management platforms that utilize machine learning to push relevant content to B2B sellers at the right point in the cycle and provide other guided selling capabilities."
Tagged under