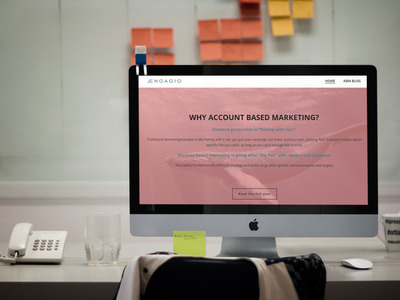 Citing the rapidly growing interest among B2B marketers in account-based marketing (ABM), Jon Miller recently left his position as VP of Marketing and Co-Founder of Marketo to launch a startup to develop an ABM platform. Miller’s new company, Engagio, has already received $10 million in Series A funding.

"As I have talked to marketers over the past year, I am convinced that ABM is going to be the next big idea in B2B marketing, and it is an area that is currently being underserved," said Founder and CEO Miller in an interview with Demand Gen Report. He noted a recent survey from LeanData in which more than 80% of B2B companies reported that ABM is now a priority. “In January 2014, ABM didn’t even show up as a Google search term."

Miller compared the current state of ABM to lead nurturing in 2008. “Just like lead nurturing, marketers are trying to figure out ABM, but the best practices are still emerging and the tools to help with the execution are only now becoming available.”

While there are platforms that offer certain aspects of ABM, such as ad targeting and web site personalization, there isn’t currently a platform that centralizes all of the activities involved in ABM, Miller noted. "Our goal is to have a complete platform that incorporates everything that is needed for a successful ABM strategy, including determining which accounts to target, orchestrating an ABM plan and measuring results."

Miller said the ABM platform will initially integrate with Marketo and Salesforce. Engagio is not currently taking beta customers, but visitors to the web site can sign up for more information about the beta program when it becomes available.

Brian Babcock, who previously held software engineering positions at Platfora, Redbeacon and Rocket Fuel Inc., will serve as CTO and Co-Founder and head up the software development and engineering efforts.

The Series A funding was led by FirstMark Capital, along with Storm Ventures and First Round Capital. Amish Jani, FirstMark founder and Managing Director, to the Engagio Board of Directors. “This gives us the runway and resources to build and scale a fast-growing SaaS company,” Miller said.

Tae Hea Nahm, Bruce Cleveland, and Doug Pepper (who collectively led Marketo’s Series A and Series B financings), are also investors, along with Bill Trenchard; and Mike Dauber of Amplify Partners.