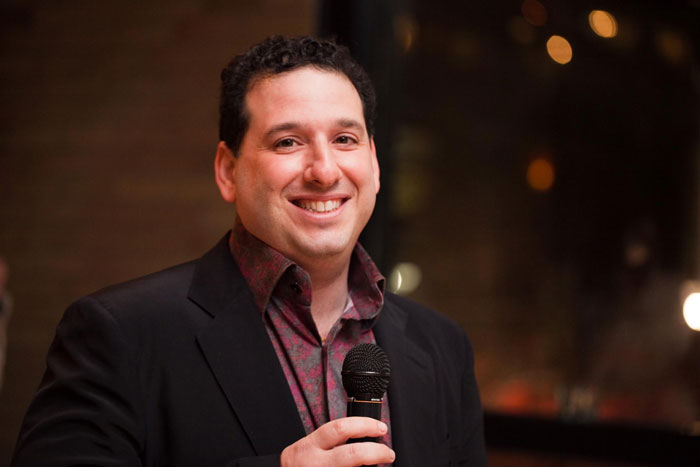 I recently attended Advocamp, the annual gathering of companies who are either starting or advancing their journey to develop and mobilize advocates. The event, which is coordinated by solution provider Influitive, drew approximately 1,000 attendees and featured an interesting mix of case studies showcasing how companies are using advocacy programs to drive content marketing, support ABM programs and reinforce customer success.

During the event, I had the chance to sit down with Mark Organ, CEO and Founder of Influitive. He keynoted the conference alongside top authors Geoffrey Moore and Seth Berger. In addition to discussing key takeaways from the event, I also had the chance to ask Organ — who was also one of the founders of Eloqua — about his brand-new book, The Messenger Is The Message.

Here are some of the highlights of that conversation:

Demand Gen Report: Influitive has been blazing the trail for advocate marketing now for a few years. What’s your sense of awareness and momentum with the category?

Organ: One of the things we’ve seen is that the number of people that have advocate marketing, or advocacy marketing, in their job title on LinkedIn has exploded. It has been increasing by more than 50% a year for the last three or four years. In addition, this conference has grown from about 250 to about 1,000 or so, over three years. So that’s pretty good growth, I think it’s an indication these ideas are becoming a lot more mainstream.

What’s also becoming really interesting this year is how advocate marketing is actually spreading beyond marketing. We have people that are involved in product [marketing] that are trying to get advocates to talk about some features that are really powerful but not as well used and get local user groups going.

A lot of people in customer success are becoming very interested in advocacy now because the best way to measure true customer success is if the customer is actively helping you get more customers. Even if that score is just a promise to advocate — which is not a bad thing to use as a metric — now you’ve got the technology and the processes available to measure what people actually do. That’s money in the bank, right? Increasingly, a lot of the effects of advocacy are measurable. The value of online reviews, for example, is becoming much more understood — how powerful they are and the value of a good customer story — in addition to what’s typically being measured, such as referrals and references.

Customer advocacy is becoming more mainstream, but there are still several years to go. If you compare advocacy to the customer success movement — which is a powerful movement — we’re very much aligned with it but they’re about six years ahead.

DGR: Congratulations on the new book, which features a really great mix of case studies. Do you have any favorites that you think really reflect the model of successful advocacy?

Organ: Marketo’s use case is very interesting. At Marketo, they have really mobilized advocacy to a lot of different things. It started with how a lot of our customers start: “Let’s get some more referrals and get some people to tell their stories.” They’ve had a great return on those and now they’re really spreading beyond. They have had so much success with what they call the “Purple Select” in their program.

Their head of customer advocacy has been given an additional mandate around making customers more successful using the product. So, it’s almost like pre-advocacy. For example, there are parts of the Marketo product that are very sticky — they drive a lot of value, but they’re not the easiest features to learn. It may be a little bit intimidating, but that’s where an advocate can be helpful, right? They can go and say, “Hey, I’ve taken the plunge. I’ve learned how to use those features and they’re amazing. They really drop a lot of value. You all should, too.”

DGR: You touched on the parallels of advocacy to the customer marketing movement. How do you see the two movements aligning or feeding off each other?

Organ: Not all companies have the same aims and objectives with respect to their program. It’s always sexy to go and win new customers and new logos, but I think there’s a lot of interest in also expanding accounts and helping customers succeed. It really can depend a lot on the company and what their goals are. For example, we have customers that might just sell to “Big Whales.” The best way for them to grow is to add additional divisions or sell additional products to the same customer. You can have somebody be a reference or refer business within a company. It doesn’t always have to be a brand new company.

ADVERTISEMENT
One of the things I’m really excited about is just how useful advocates are everywhere in the funnel. In this book, a lot of it has actually been written by our advocates. We went to our advocates and said, “Here’s half a chapter, how would you make it better? We hear your stories; what’s your data?” Advocates can play an important role in thought leadership, and the job of thought leadership — as Geoffrey Moore discussed in his keynote here at Advocamp — is to get a budget owner to change their allocation of budget. So, advocates can be very helpful there in generating new budgets. They’re involved in top-of-funnel, where it’s a lot of content marketing. We have quite a few customers where a lot of their content is actually being written by advocates. We have one customer, SMART Technologies, where all their blog content is pretty much written by their teacher advocates. So that becomes very powerful there; not only does that reduce the load on the marketing department, but that’s just powerful authentic content. Then there’s the bottom-of-the-funnel with respect to converting opportunities.

For example, when you look at this event for us, Advocamp is more than two-thirds prospects. Part of why it’s here is because the prospects are here, and they get converted by the advocates that are here as well. Advocates are very useful for that, as well.

Is customer marketing about selling more? Is it about marketing more to customers, or is it more about advocacy? I mean, increasingly, I think it’s one and the same and that’s what we’re seeing. The more sophisticated companies are looking at advocacy as their metric for success. If I have a truly successful customer, that’s what they’re going to do. They’re going to advocate, and the quality — and quantity — of the advocacy is going to be higher.

DGR: There’s another chapter in the book that talks about integration, and you talked about some of that earlier. Do you see that as integration of technologies as well as disciplines like integrating advocacy into ABM?

Organ: It’s really integration into processes; but these days, processes all have technology that drives them, right? The whole world is digital now. So, I’m not sure if you can even separate technology from process anymore. With ABM, for example, companies have these established processes for developing a list of companies that they’re trying to target, and then how they’re going to go and prosecute those lists. Well, now some leading-edge companies are integrating their advocacy operations into ABM. Companies are integrating their advocates into the way that they do content. For example, the traditional idea of how we develop content is to get a bunch of people on the marketing team in a room, and maybe some other people, and then they draw on the whiteboard and say, “What are the messages that are missing in the market and how do we go and fill that?”

Well, the modern way to do that is you go to your customer advocates and ask the same question: “What thought leadership is missing from the market right now? What messages do you need to hear that you’re not hearing from us?”

When you get some ideas, the next thing is, “Well, who knows something about that? Do any of our partners or customer advocates have some expertise in this area? I bet you can get people to actually write that content.” We get other people to go and augment that initial content with additional stories and data and then, finally, you can get the advocates to go and share that, right? So, the entire content marketing process is being augmented significantly by advocates and that’s happening in so many areas.

DGR: You saw the huge growth of Eloqua and the marketing automation category. How would you compare what you saw in the growth and evolution of Influitive and the advocacy category? Are the market dynamics different?

Organ: Yes. The headline growth is actually very similar, interestingly, even though the market dynamics are quite different. Right now, we’re about seven years in at Influitive. At Eloqua, I think we were a little bigger at the same time. The big difference in terms of market dynamics is that when I was running Eloqua at this time, there might have been 20 marketing software companies in the world at that point. Twenty marketing software companies of note, that at least have some scale to them and were targeting the marketing department. It was that small.

That count is over 5,000 now. So there’s just a ton more technology out there. Every process has a piece of technology. CMOs are really inundated with all kinds of ways where they could spend their time and money. At the same time, their budgets are also about 10 times bigger. So there’s a lot more money at stake, there are a lot more companies out there and so it ratchets up both the risk and reward for companies like us. There’s a big prize available for the company that is able to build the next great marketing automation system and we believe that advocates are going to play a really critical role in that building a marketing automation system around nurturing with content is not going to be the way of the future.

People are inundated with content, they can’t read any more content. They don’t trust the content that comes from companies so there’s no way that is going to be the future. I think that the future is much more likely to be about the ability to mobilize the right peers to talk to the right people and so we’ve got a shot at building something pretty big here.

We’re also very intrigued by messaging. I think that looking at what WeChat is doing in China, which has about a two-year head start over what’s happening here in the West. Here, we’re looking at things like Facebook Messenger and Slack. If you look at young people; this is the way they want to communicate. So email is dying. It’s a very slow death, okay? Email is still going to be around, probably in 10, 15 years, but it is dying. The channel that is very much on the rise is messaging and the companies of the future. I mean, if you want to build a great marketing platform, you’ve got to really figure out how to leverage messaging in the right way and we’re doing a lot of thinking about that. We believe that, somewhere between messaging, mobile and advocates, we’re going to see multi-billion-dollar platform companies that are built and our aim is to be one of them.